Good and bad luck in ancient Rome was controlled by the goddess Fortuna, who could be persuaded to favor or smite a person by certain actions. Do any of the following look familiar? Many ancient Roman superstitions have survived to this day. 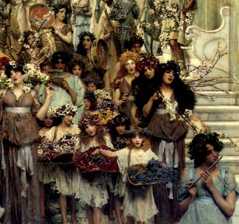 Cut your hair on the 17th and 29th of a month to prevent headaches and baldness
Say “Good health” (bona salus) after someone sneezes
Say “two” (duo) at the sight of a scorpion to prevent it from stinging
Silently cut your nails, beginning with the index finger, while in Rome on a market day
Spit on your hand after inflicting a blow to lessen any resentment from the person struck
Spit on your right shoe before putting it on
Spit on your urine
Retrieve a thrown horseshoe
A bride touches a doorpost with pig fat upon entering her new home

Attacking the memory of a dead person
Sweeping a floor when a dinner guest is leaving
Removing a table or serving tray while a guest is still drinking
Mentioning fires at a banquet, which is remedied by pouring water under the table
Attending a banquet that has an even number of diners