This was a ceremony to honor the Roman Goddess ~Bona Dea (“Good Goddess”).

She was believed to have protected women.

The rituals took place in secrecy, and males were strictly forbidden.

Dancing, drinking and worshiping sacred objects may have been involved in the rites.

At first, this ceremony only lasted for a day, but later, it was lengthened to a week.

It was begun with sacrifices made to the Roman God Saturn at his temple.

Then young pigs were killed and eaten for dinner the next day and the masters waited on their slaves. 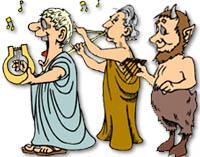