Buckingham Palace is the headquarters of the British Monarchy and is used as both a home and office.

Soon after George IV took the throne, he ordered that Buckingham House, the London home of his parents, be destroyed and a new, more suitable residence be built.

However, as Parliament was not willing to advance the £500,000 that George estimated would be necessary to construct an entirely new building, it was decided that Buckingham House should be renovated, instead. 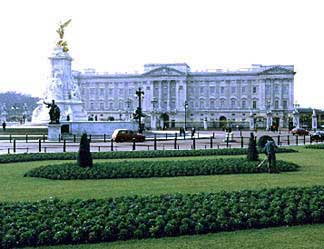 John Nash was chosen to be the mastermind of the renovation, and even though the budget was fixed by Parliament at around £200,000, the project quickly expanded beyond anything provided for in the original estimate.

The design called for a three-sided court with an opening on the eastern side, where Marble Arch would stand, acting as a gate (the arch was moved to its present location at Hyde Park Corner in 1851).

The new Prime Minister, the Duke of Wellington, when asked by Nash for more funds to pull down and rebuild the wings, as they didn’t meet with the king’s approval, replied, “If you expect me to put my hand to any additional expense, I’ll be damned if I will.”

Nash was dismissed from the project in 1830, and the responsibilities were assumed by architect, Edward Blore, who enclosed the open side of the building, giving it the appearance we see, today, and made badly needed repairs to the faulty plumbing and ventilation facilities inside.